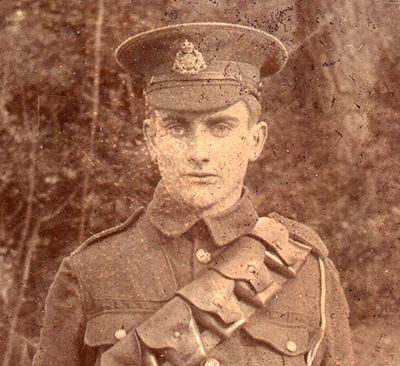 Biography
Born at Ambergate, he lived 1896-1968. He is a younger brother of George James Wilson and Vernall Haslam Wilson, who have both been included on the 2018 Roll of Honour. During WW1, Victor served with the Derbyshire Yeomanry and later with the Labour Corps. After the war, he settled at Belper, and married Ida White in 1918 December qtr (Belper reg district). Unlike his brothers, he was not born in Crich Parish, nor did he ever live within the parish, so has not been included on the 2018 Roll of Honour.

Medal Roll Index Card
He was awarded the Victory, British War and 15 Star medals
Awarded the Silver War Badge
Served in Egypt from 27.4.15


Ripley and Heanor News, 19 November 1915
Mr Vernall Wilson (West Bank, Ambergate) has received word that his brother, Trooper Victor Wison (Derbyshire Yeomanry), Dardanelles, has been received in hospital at Seymour Park, Manchester, suffering from dysentry. Mr Vernall Wilson has another brother serving with the Colours, Sergt George Wilson. who has been in France since the commencement of hostilities.

Sheffield Daily Telegraph, 20 November 1915
Ambergate Trooper
News has been received that Trooper Victor Wilson of Ambergate, who has been out with the Derbyshire Yeomanry in the Dardanelles, is in hospital at Manchester, suffereing from dysentry. His brother – Sergeant George Wislon _ has been out at France since the opening of hostilities.