Notes
Bertram Parker worked in the Factory at Lea Mills. He was the son of Frank Parker, who was the scorer for the Cromford Cricket Club. The family lived in North Street, Cromford. Bert Parker had been a boy scout and later became an assistant scoutmaster.
Before the war he played football for Cromford. 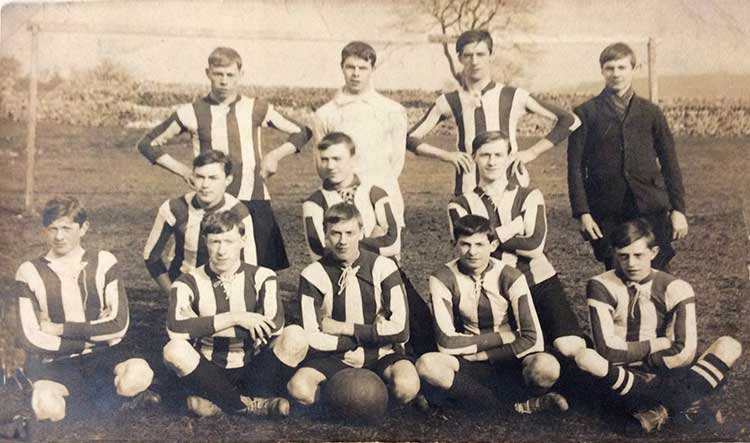 Bert is second left on the front row

He volunteered in August 1914 and left to serve on 28th August. He was one of the many who rose to the call to arms during that month. He joined the Sherwood Foresters and served with the Mediterranean Expeditionary Force in the Dardanelles, where he was wounded in 1915. He was discharged subsequently from the army: his discharge occurred before October and December 1916 when the parcels containing hosiery and groceries were sent to employees of the Company, who were then serving. In the book recording those who served and were eligible to apply for re-employment at the Mill, he is noted as having ‘gone elsewhere’ at the end of hostilities.

Postcard from Bert to his mother

Bert on the right (is his friend John Gould on the left?)

Bert sitting in front of the car maked with a cross

Bert on the left

Medal Card Index
He was awarded the Victory, British War and 15 Star Medals; also the Silver War Badge.
He entered the Balkans 31/12/15
Discharged 05/04/16

Derbyshire Times 14 August 1915
CROMFORD CASUALTIES
Cromford people have heard with regret this week that private John Gould of the 10th Sherwood Foresters and Drummer Bertrand Parker of the 9th Sherwood Foresters, have been wounded. The former was serving in France, and the latter in the Dardanelles. Drummer Parker, who was formerly the assistant Scoutmaster at Cromford, only set sail for the Dardanelles on 1 July, and was wounded on the 26th. No details are to hand as to the extent of his injuries, but the fact that he has himself sent a postcard to his parents, Mr and Mrs F.Parker, of North Street, appears to justify the hope that they are not of an extensive character. Private Gould has been wounded slightly in the head by shrapnel, and is stated to be going on satisfactorily.

High Peak News 21August 1915
CROMFORD
OUR WOUNDED SOLDIERS
Last week we briefly referred to the fact that two of our brave soldiers had been wounded, one at the Dardanelles, and the other in France. These were Private John M.Gould, son of Mr Joseph Gould, of 61, Cromford Hill, of the Sherwoods, who was wounded in France; and Private Bertrand Parker, also of the Sherwoods, son of Mr and Mrs Frank Parker, of 23 North Street, who was wounded at the Dardanelles.

DRUMMER BERTRAND PARKER
Drummer Bertrand Parker, with the 9th Sherwoods, wrote: –
"I am progressing favourably, but I cannot move my arm. I shall remain here some time. The doctor says the bullet passed through some bone in the shoulder, and they have strapped my arm tightly. We had a week on the hospital ship before we were taken to Alexandria. This place (he is at –) is not bad, but it is terribly hot, as you will expect, but we are close down by the sea, in a canvas hospital, so we do not feel the heat as much as you would think. I have received no letters since I left England (many have been sent, Mrs Parker told our representative, together with parcels). The doctor seems to think mine was a serious case. We were under shellfire directly we got on the beach, and shells were falling all around us will stop it seemed marvellous that we were not all wiped out when we got into the open. I had a week in the trenches."
The gallant Drummer concludes with a remark – "This writing is not so bad for one arm."
May he and his comrades soon be restored to health and strength. They were both extremely popular in Cromford.
The photograph is by Simpson and son Grantham.

[Unknown newspaper and 1915 date: courtesy Marjorie Whitham]
LOCAL SOLDIERS WOUNDED.
PRIVATES JOHN GOULD AND BERT PARKER.
It was a coincidence that on the same day news came to the relative of two of our soldiers that they had been wounded at the Front, one in France and
the other at the Dardanelles.
Private John GOULD is the son of Mr. Joseph Gould, of Cromford Hill, who joined the Sherwoods, and went out to France not long ago.  The report states he has been wounded in the head, and is now in the hospital at the base. The wounds are stated not to be serious.  He is, we are glad to hear, going on nicely.
Private Bert PARKER joined the Sherwoods, like his comrade, and he is the son of Mr. Frank Parker, of North Street, the well known scorer for the Cromford Cricket Club for many years.  Private Bert Parker is wounded, and no further details are to hand as yet.
It is a splendid item with regard to both these soldiers that they were prominent members of the Boy Scouts movement, at Cromford, long before the
war. Private Parker was Assistant Scoutmaster, and Pte. Gould a member of the Troop.  Everyone in Cromford is proud of Pts. Gould and Parker, and we all trust both will be quickly restored to health and strength. Both worked at the Lea Hosiery Mills before the war broke out.