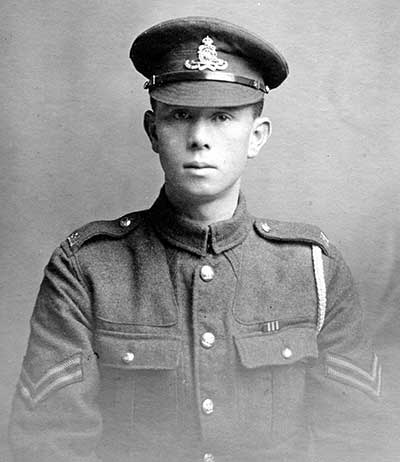 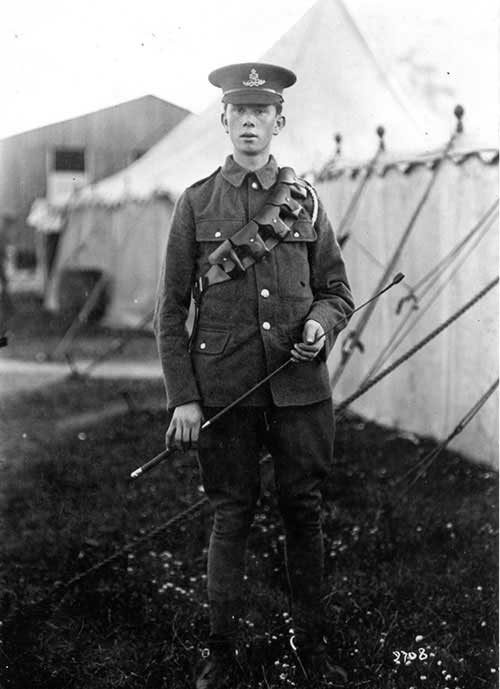 Biography
Albert, born in Birmingham in 1894, was the son of George and Louisa Williams who lived at Sawmills before they moved to Cromford Road, Crich. Before he joined the Royal Field Artillery he worked at Ambergate Wireworks. He enlisted at Derby in January 1915 and entered France in the July of that year. He was awarded the Military Medal in April 1918 before being demobbed in February 1919. 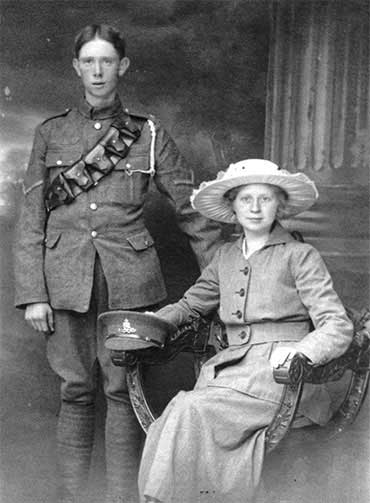 Army Service Record
Enlisted 21 Jan 1915 at Derby; address Sawmills, aged 20years 7 months; wiredrawer . Height 5ft 7½; weight 120lb. Next of kin his father George Richard Williams
21 Jan 15 Posted at Glasgow
21 Jan 15 to 22 Jul 17 Home
23 Jul 15 to 15 Feb 19 France
16 Feb 19 Home
17 Mar 15 Posted gunner No 6 Depot
16 Mar 16 Acting Bdr
28 Mar 17 Promoted Bdr
30 Apr 17 Promoted Cprl
13 Dec 18 to 27 Dec 18 Leave to UK via Boulogne; 14 days rail allowance
16 Feb 19 Demobbed
Military Medal for Bravery in the Field
Letter dated 4.4.18; 20th Division N0. A/9473
O/C D.A.C.
I have much pleasure in bringing to your notice No.84055 Cpl. A. Williams, No.3 Section D.A.C.
This N.C.O. was in charge of a complete Sub-section during the whole of the recent operations, between St.Quentia and Domsat-Sur-La-Luce, and kept the entire front line supplied with S.A.A. Ammunition, Lewis and Vickers Guns, Belts and Drums.
He carried out his duties in a conspicuously gallant manner. and materially aided the Battalions holding the line under very critical circumstances; he worked untiringly day and night,setting a splendid example to thos under him.
I should be very grateful if he may officially informed of our appreciation.
(signed) H. Muller, Lieut:Colonel
A.A. & Q.M.G. 20th Division

Memorabilia
The following memorabilia and photographs are courtesy of Margaret Suddes.

The Major-General Commanding 20th (Light) Division has received a report of the gallant conduct of 84055, Corpl. A. Williams, No. 3 Section, 20th D.A.C. from 21st March to 1st April between ST. QUENTIN and DOMART-SUR-LA-LUCE, in working untiringly day and night during the whole of this period keeping units in the fighting line supplied with small arms ammunition, setting a splendid example to those under him and he wishes to congratulate him on his fine behaviour. 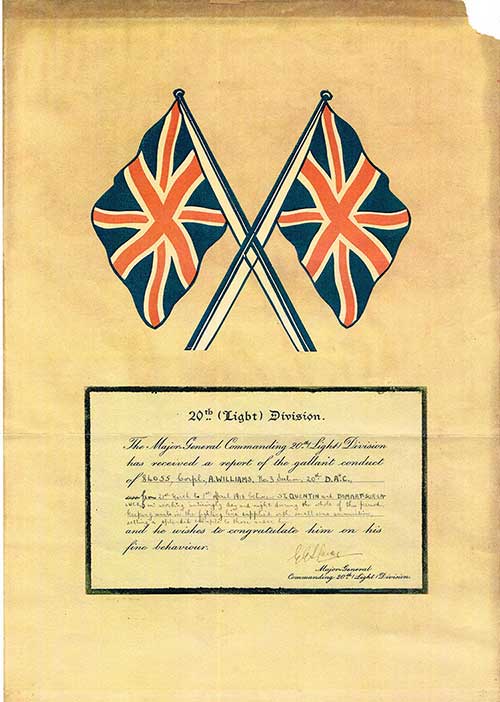 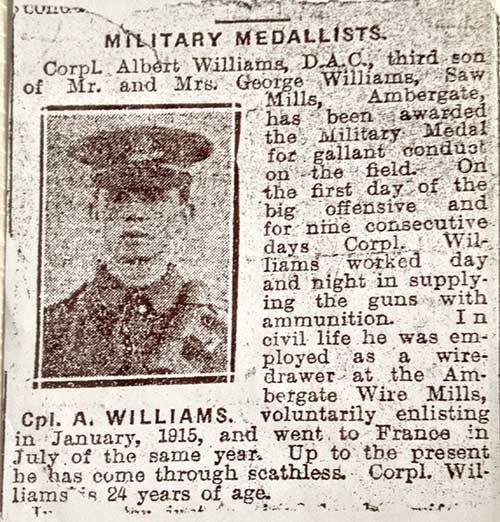 Corpl. Albert Williams, D.A.C., third son of Mr and Mrs George Williams, Saw Mills, Ambergate, has been awarded the Military Medal for gallant conduct in the field. On the first day of the big offensive and for nine consecutive days Corpl Williams worked day and night in supplying the guns with ammunition. In civil life he was employed as a wire drawer at the Ambergate Wire Mills, voluntarily enlisting in January 1915, and went to France in July of the same year. Up to the present he has come through scathless (sic). Corpl. Williams is 24 years of age.

Ripley and Heanor News and Ilkeston Division Free Press, 31 May 1918 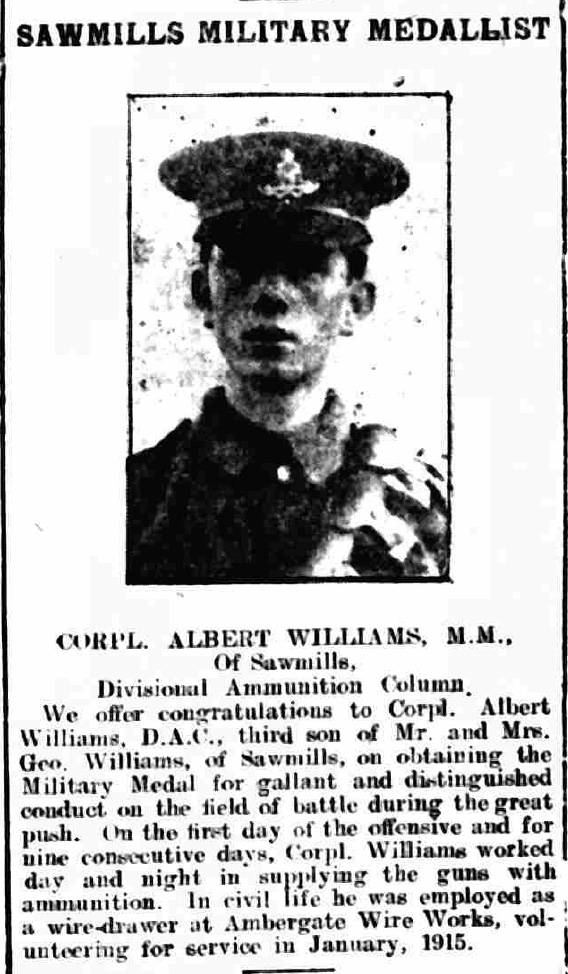 SAWMILLS MILITARY MEDALLIST
CORPL ALBERT WILLIAMS MM of Sawmills
Divisional Ammunition Column
We offer congratulations to Corpl Albert Williams DAC, third son of Mr and Mrs Geo. Williams, of Sawmills, on obtaining the Military Medal for gallant and distinguished conduct on the field of battle during the great push. On the first day of the offensive and for nine consecutive days, Corpl Williams worked day and night in supplying the guns with ammunition. In civil life he was employed as a wire-drawer at Ambergate Wire Works, volunteering for service in January, 1915 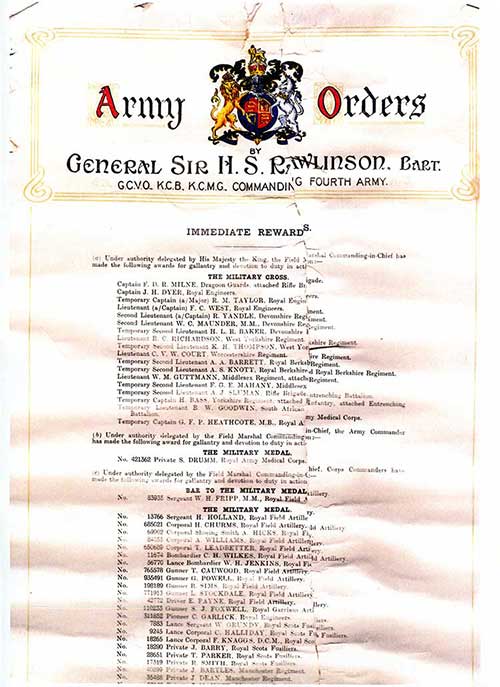 Albert wanted to receive his Military Medal at his place of work, Johnson and Nephew Wireworks, Ambergate. 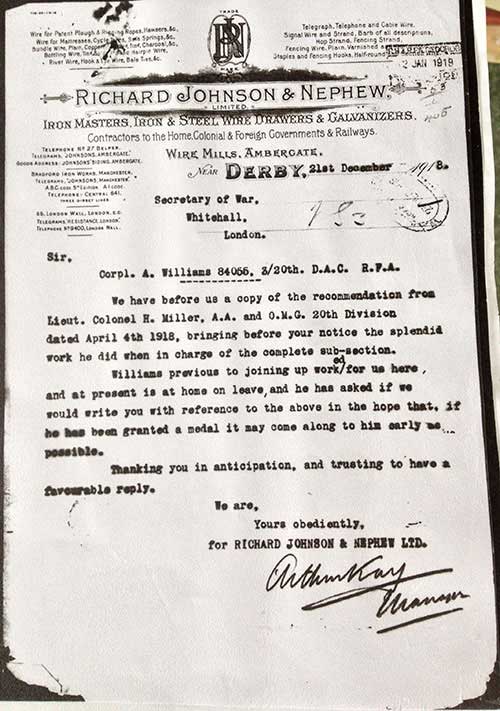 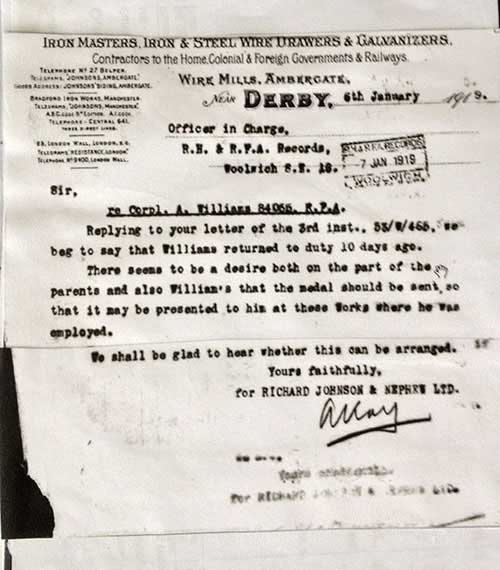 Derbyshire Courier, 29 November 1919
The employees at the firm of Messrs. Johnson and Nephew, wire manufacturers of Ambergate, celebrated the peace with, "Victory sports" and tea on Saturday.
The athletic program included a tug of war, a race for foreman and officials, and a football competition between the various shops. Between 600 and 700 guests sat down to tea, and afterwards the prizes were distributed by Mrs Herbert A.gJohnson, Allestree Hall, to whom a hearty vote of thanks was passed on the proposition of Mr T. Key, seconded by Mr T. Butt, Jr. in the course of the evening Colonel H.A. Johnson presented the Military Medal to one of the firm's employees, Corporal Albert Williams.
Mr W. Glossop's string band played selections whilst tea was being served, and also took part in the entertainment which followed. Others who contributed to the programme were Madame Kate Shipley, Madame Tugwell Fox, Mr Fox, Mr Robert Oliver, Mr Bert Holbridge, and Mr J. Weaving. The accompaniments were played by Mr H. Kirk. Each man received a box of cigarettes and the women guests were presented with boxes of sweets.

Like many servicemen Albert sent home cards, many of which were sentimental and beautifully created. 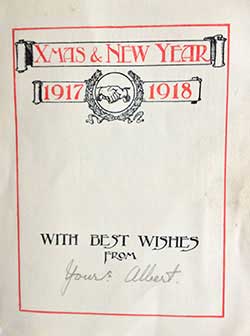 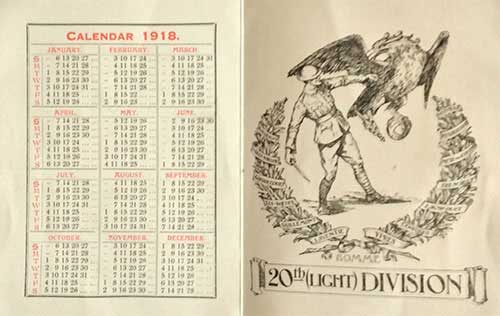 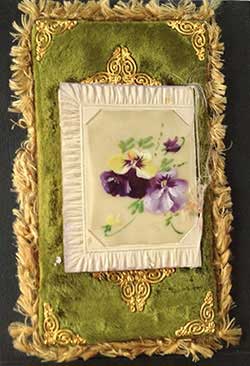 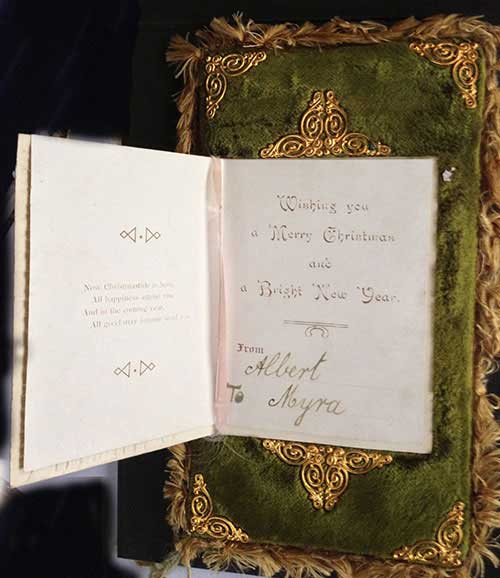 After the war Albert was very heavily involved with village activities. He died on 4th June 1970 aged seventy-six and his obituary summed up his life.

Unknown cutting June 1970
A FORGOTTEN HERO PASSES ON
On Tuesday, last week was laid to rest the late Albert Williams, M.M. of 10 Cromford Road, Crich. Although he was born in Birmingham his parents came to reside at Ambergate when he was three years of age and later came to reside at Moseley Street, Ripley, during the first Great World War 1914-18.

The late Corporal Williams volunteered for active service early on and was sent to the Maryhill Barracks Glasgow. He saw service in many of the epic wars at Arras, Cambrai, the Somme, Ypres, and St Quentin. It was in 1918 that he gained his military medal.

The citation re the winning of this medal reads as follows: “20th Light Division. Gallant conduct of 84055 Corporal A. Williams, No. 3 Section 20th D.A.C. from 21st of March to 1st April, 1918, between St Quentin and Domart Sur-La-Luce in working untiringly day and night during the whole of this period setting a splendid example to those under him.” It was the proud boast of the late Albert Williams, that during the whole of his active service he never lost a man who was under his command.

After the war Corporal A. Williams married Myra Hayes of Crich and they settled down in Crich, where Albert Williams was a legendary figure. He took an active part in all the carnivals organised to raise funds for the hospitals. He represented Crich on the Belper Rural District Council with distinction for a number of years. He was also a prominent member of Crich Parish Council and its chairman.

For a number of years he was a prominent member of Crich schools and chairman of the Evergreen Club. In this time Albert Williams played many parts and his aim was to be of service to his fellow man. This modest hero will long be remembered and revered by those who had the privilege to know him.

After the death of his wife he was well cared for by Miss Emma Greenhough, his son Clarence, and his daughters Lorna and Janet. Many of his friends came to pay him tribute at Crich Parish Cemetery. In his passing, we have lost a great hero, a staunch Labour supporter and a loyal comrade. We salute his memory and deeply mourn his passing.

The following monologue by Martyn Offord was read at the November 2014 "Crich Front Lines" memorial event in the Glebe Field Centre in honour of Albert Williams.

The family moved from Sawmills to Cromford Road, Crich.