During WW1 some soldiers made artifacts fashioned from spent ammunition found in the trenches.

From a WW1 exhibition at the Crich Comrades' Club November : 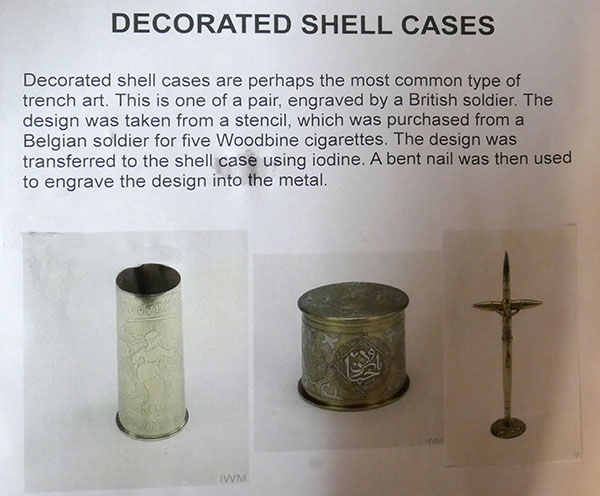 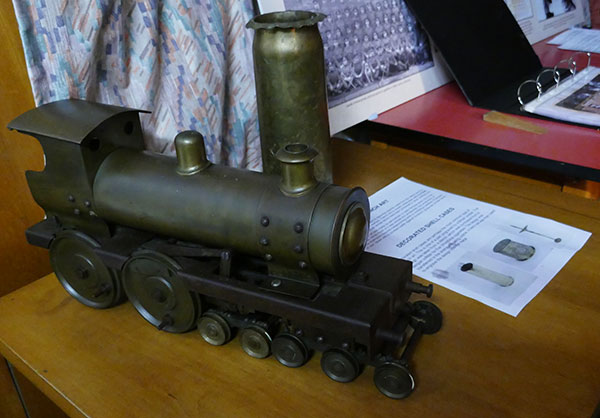 In Flanders Fields
In Flanders fields the poppies blow
Between the crosses, row on row,
That mark our place; and in the sky
The larks, still bravely singing, fly
Scarce heard amid the guns below.

We are the Dead. Short days ago
We lived, felt dawn, saw sunset glow,
Loved, and were loved, and now we lie
In Flanders fields.

Take up our quarrel with the foe:
To you from failing hands we throw
The torch; be yours to hold it high.
If ye break faith with us who die
We shall not sleep, though poppies grow
In Flanders fields.

Ripley and Heanor News
January 1915
WAR ALPHABET
A is the Allies, all fighting so brave,
B is the British, who digged Germany's grave;
C is the Commander, von Kluck by name,
D is for Draught, which has got in his brain,
E is for England, which has won much renown,
F is the Farderland, which is being ground down,
G is the Germans, who think they can fight,
H is for Hell, where they'll go to all right.
I is for Iron Cross, of Germany fame,
J is for Joke, which would be a better name;
K is the Kaiser, who sent his men to the front,
L is the Language he'll use when you bunked
M is the Master, which England will be,
N is our Navy, who'll smash Bill's on the sea.
O is for Ostend the Kaiser's now got.
P is his Power, he'll lose all the lot.
Q is the Quarrel the Kaiser begun,
R are Rifles, that make his men run.
S is for Scarborough he had to shell,
T are the Tears we shan't shed when he's in hell
U is the Uniform the Germans boasting,
V is the Von Kluck, he'll soon be roasting.
W is the Worry, which will turn the Kaiser grey,
X is the eXpense he'll be put to one day;
Y is that Year the Kaiser made war,
Z are the Zeppelins which London never saw.

The following are poems written by Derbyshire men who served in the Notts & Derbys/Sherwood Foresters during WW1. They were sent home and were published in the Derbyshire Times.

Written by a Lance Corporal who was with the 2nd Btn. Sherwood Foresters during 1915:
It can be sung to the tune "What a Friend we have in Jesus".

THE DREAM OF THE TIME-EXPIRES

Only just one more Reveille,
Only one more night Parade,
Only one more Kit Inspection,
Then we're marching home again.
When we get our "Civi" clothes on,
Oh! how happy we shall be,
When this bloomin war is over,
No more soldiering for me.

Compliments will then be fewer,
Guards, Fatigues, will be no more,
We'll be spooning with the wenches,
As we did in days of yore;
N.C.O.'s will then be navvies,
Privates in their motor cars,
No more "Siring" and Saluting,
No more tea in two pound jars.

No more marching, no more doubling,
In the morn at six-fifteen.
No more pushing blooming barrows
On the range at Knowsley Green;
No more smarter men; now smarter
No more bread like granite rock,
No more rising at five-thirty,
And "lights out" at ten o'clock.

No more asking when we're marching,
Please sir, can we have a drink,
Or because we drop a shovel
No more putting in the "clink";
No more "tioning" "as you were then"
No more work, a bob a day
When there is another war on,
We'll find a job that brings more pay.

People told us when we "listed"
Fame and Medals we would win,
But the fame is in the guard room,
And the medals made of tin;
When we've finished with the "Keiser"
At the Empire we will sing,
Derby's Pantomime Battalions
Twice a night, God Save the King.

Written by a Private in 'A' Company 2nd Battalion Sherwood Foresters 1915, from the trenches

THE RED, RED ROAD TO HOOGE

On parade, get your spade,
"Fall in" the Pick and Shovel Brigade,
There's a carrying fatigue for half a league
And a trench to dig with a spade.
Through the dust and ruins of –––* town,
The 17 inch shells battering down,
Spitting death with their firey breath
On the Red, Red Road to Hooge

The burst and roar of a hand grenade
Welcomed us on the Death Parade
The Pit of Gloom, the Valley of Doom,
The crater down at Hooge
Fall many a soldier of the Rhine
Must stop tonight in a pit of lime
Tis a pitiless grave, for a brave or knave
In the Crater down at Hooge.

Hark to the din of a fusillade
Brig your rifle and bring your spade,
And fade away at break of day
In a hole you'll fill at Hooge,
Call the Roll and another name
Is sent to swell the Roll of Fame
So we carved a cross to mark the spot
Where our chums had fell at Hooge

Noit a deed for paper for which man will write
Of a glorious charge in the dawning light,
The Press who wait won't tell the tale
Of the slaughter done at Hooge.
But our General knows and his praise we won
For the glorious work our lads had done,
Through shot and shell, through the Gates of HellOn the Red, Red Road to Hooge.

[Historical Note: The British position in the ‘Hooge’ area had become quite unstable in the summer of 1915. The German troops had an excellent overview over the British frontline. The British tried to eliminate this fortified German position with a limited but well targeted attack. They exploded more than 1700 kg of dynamite in a tunnel, made by the special Tunneling Companies of Royal Engineers. All this happened on July 19th, 1915. This crater was later called the ‘Hooge Crater’.] 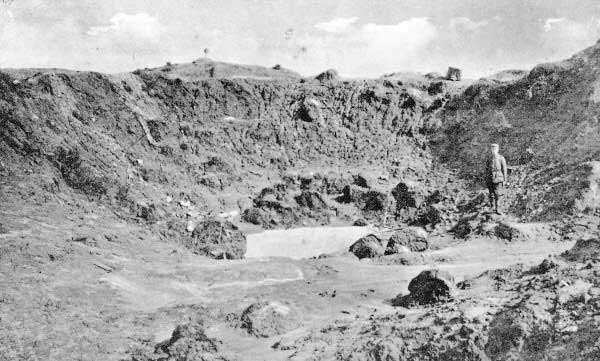