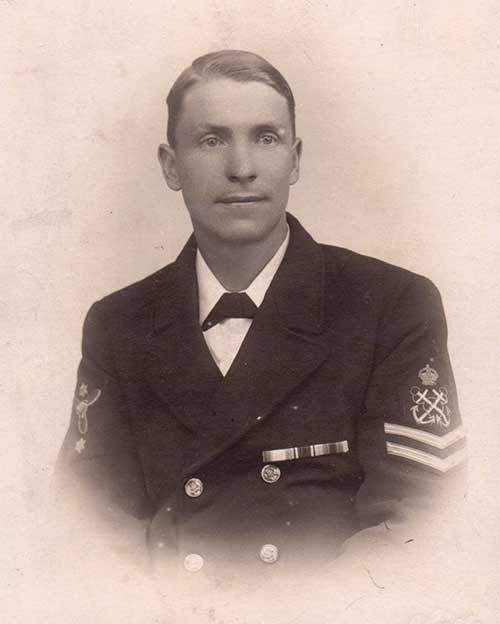 Harry pictured during the latter stages of WW1, or shortly afterwards. The badge on the right upper sleeve of a three-bladed propeller with a star above and below denotes the rank of Stoker Petty Officer. Harry held this rank from 1918-1926. The two chevron badges on the left upper sleeve are Good Conduct stripes. The photograph is embossed with the unreadable name of a Sutton-in-Ashfield photographer

Biography
[Simon Johnson, with thanks to Norman Fletcher, Doris Aston, Jacky and David Cocks]
Harry Rodgers Prince – often better known as Harry Rodgers – was born at Crich on 7 April 1893. He was the youngest of the seven children of John Rodgers Prince and Rebecca Else, with three brothers and three sisters, though one of the brothers passed away in infancy. Harry was raised at Crich but by 1911 he was boarding with his sister and her family at Alfreton, where he worked as a coal miner.
Harry joined the Royal Navy for an initial twelve years’ service on 22 August 1913, with the rank of Stoker 2nd Class. He spent several months stationed at HMS Victory II, which was the name given to a shore-based training and administrative depot which, at the time of the First World War, was situated at Crystal Palace in London. The first ship on which Harry served, pre-war during 1914, was HMS Edgar. During the period 1914 to 1920 Harry served on board HMS Agincourt, gaining promotions to Stoker 1st Class and Leading Stoker. After spending a period as Acting Stoker Petty Officer, he became a non-commissioned officer when he was promoted to Stoker Petty Officer in May 1918. HMS Agincourt participated in the Battle of Jutland in 1916. Harry was awarded the Victory Medal, British War Medal, and the 1914-15 Star.
After the war, and until 1929, Harry is known to have served on board HMS Hercules, HMS Carlisle, HMS Weymouth, HMS Despatch and HMS Diomede. When back on shore in England he also spent brief periods stationed at a variety of shore establishments during this time: HMS Victory II, HMS Vernon and HMS Fisgard. In 1926 Harry was promoted to Chief Stoker – the highest rank for a stoker in the Royal Navy. Harry’s service records beyond 1929 have not yet been consulted, though it is known that he spent time based in New Zealand during the 1920s and 1930s. In 1925 HMS Diomede was transferred to the New Zealand Division of the Royal Navy at Devonport, a suburb of Auckland, where she served until 1935. In 1935 Harry was awarded the King George V Silver Jubilee Medal.
Harry married Ethel Marion Crawford-Compton (née Horne) in New Zealand in 1932 and they lived in Auckland. Ethel passed away shortly after the marriage in 1933. Ethel’s son from a previous marriage was William Vernon Crawford-Compton (1915-1988) who had a long and distinguished career with the Royal Air Force and was the most decorated New Zealand fighter pilot of the Second World War. Based in England for many years, Bill retired from the RAF with the rank of Air-Vice Marshal.
After his wife’s death, Harry remained in Auckland and married his second wife Maud Matilda Louise Maguire in 1935. He had returned to live in England by the 1940s and settled at Coventry where he worked for the Admiralty at Coventry Ordnance Works on Red Lane. He married for a third time in 1952, inheriting four stepchildren.

Harry Rodgers Prince passed away at Coventry on 30 July 1978, aged eighty-five years. He was laid to rest in London Road Cemetery at Coventry.
Harry’s name was listed on the original Roll of Honour in Crich Parish Church as ‘Harry Rodgers’. 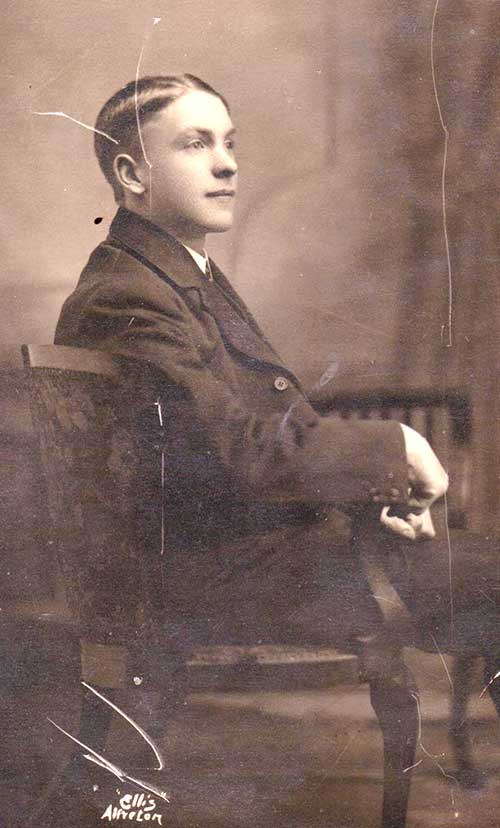 A young Harry, circa 1910s. The photographer was 'Ellis, Alfreton' 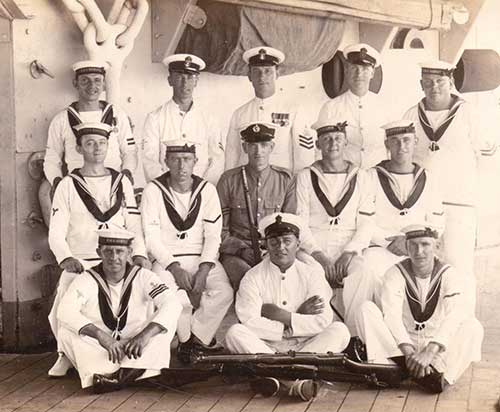 Harry is pictured second from the right on the back row. Taken whilst he was serving on HMS Despatch, circa 1925-1927. 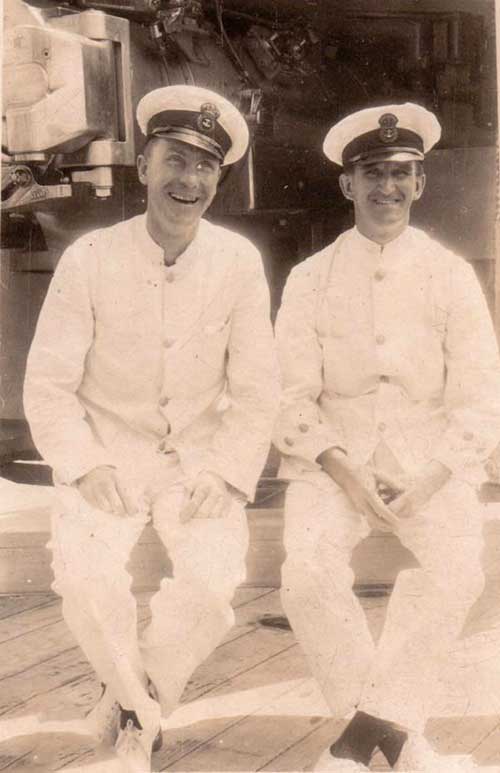 Harry is pictured on the left, circa mid-late 1920s 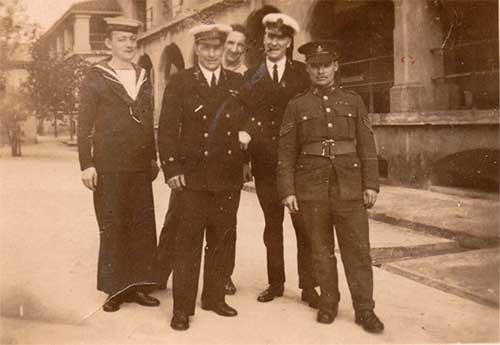 Harry is pictured second from the right, smoking a pipe.
Taken in Kowloon, Hong Kong, on 20 April 1927, whilst he was serving as Chief Stoker on board HMS Despatch. 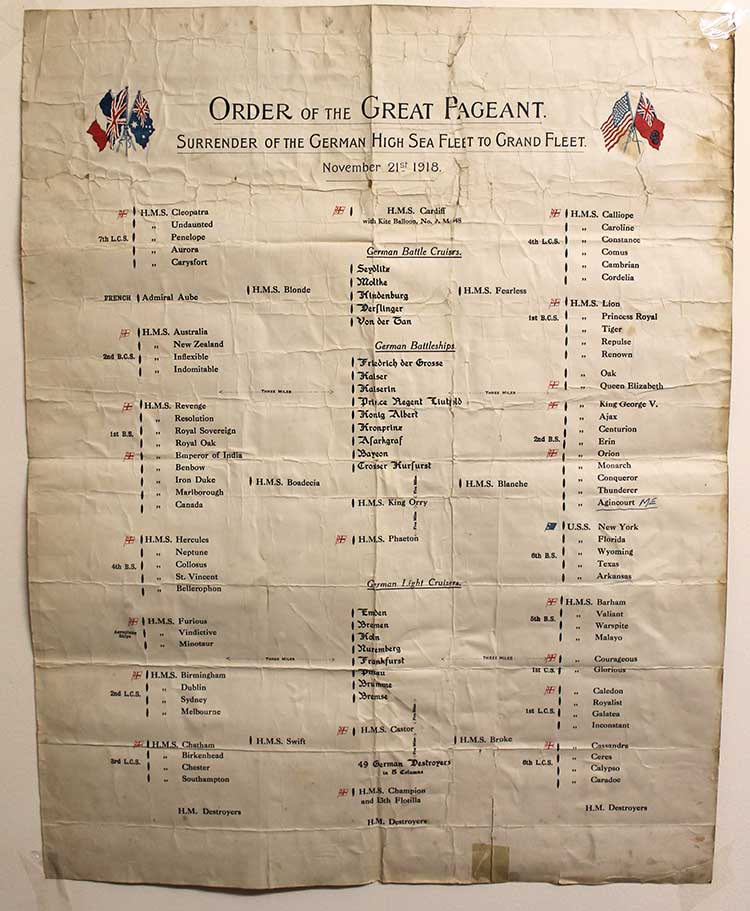 A chart of unknown provenance titled 'Order of the Great Pageant
Surrender of the German High Sea Fleet to Grand Fleet, November 21st 1918'.
This was located amongst Harry's possessions.
He has annotated the chart with 'ME' next to HMS Agincourt, on which Harry served during WW1.
Film of the surrender of the German High Seas Fleet can be viewed at the website of the Imperial War Museum: http://www.iwm.org.uk/collections/item/object/1060023166 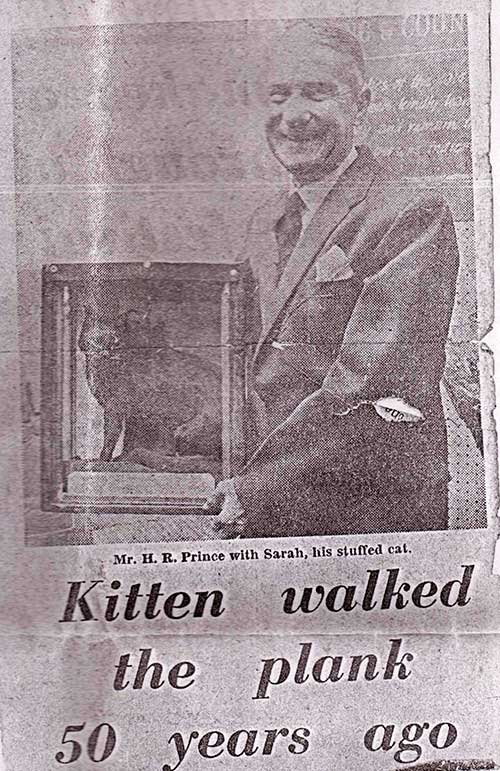 Kitten walked the plank 50 years ago
Coventry, Friday
More than 15 years after he captured a kitten from a German trawler, 72 years old Mr H R Prince, of 37, St Christian Road, Cheylesmore, Coventry, still has the cat that served with him for the remainder of the war.
The cat, now stuffed and mounted in a glass case, is called Sarah. It has not left Mr Prince's garage for some years but he often recalls the time when it came into his possession in 1914.
"I was serving on HMS Agincourt at the time. We arrested the trawler in the North Sea, and I think Sarah must have crossed on a plank that we had between the two vessels", explained Mr Prince.
"I became very fond of her, and took a home to Sutton in Ashfield when I was taken off the Agincourt in 1920."

Naval Record
He enlisted 22 August 1913 for 12 years. Born at Crich/Matlock 7 April 1893, scar on left forearm, tattoo of a bird on right forear. Height 5 ft 9in with fair light brown hair and grey eyes. Worked as road layer and in a colliery.

Photographs of ships from Wikipedia 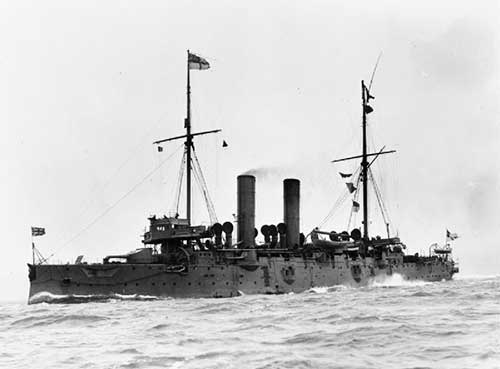 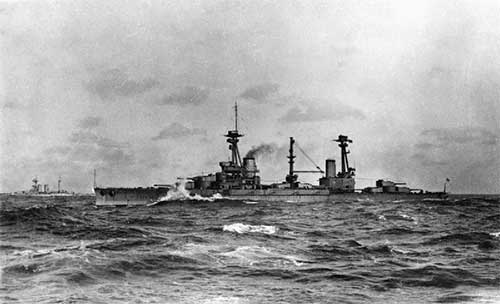 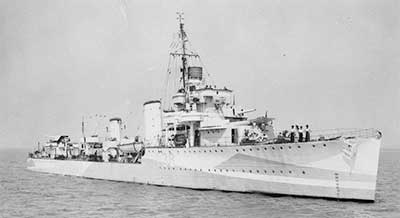