Biography
Charles was born at Crich in 1882, and like his father he worked as a stonemason. In 1903 he married Eunice Hawksley. He enlisted as a regular solder into the Foresters in 1908. On his discharge in 1919 he was awarded the Silver War Badge, presumably the results of wounds previously sustained as reported in the press.
In 1932 he represented the Sherwood Foresters Old Comrades Association at a memorial service at the Thiepval Memorial in France. 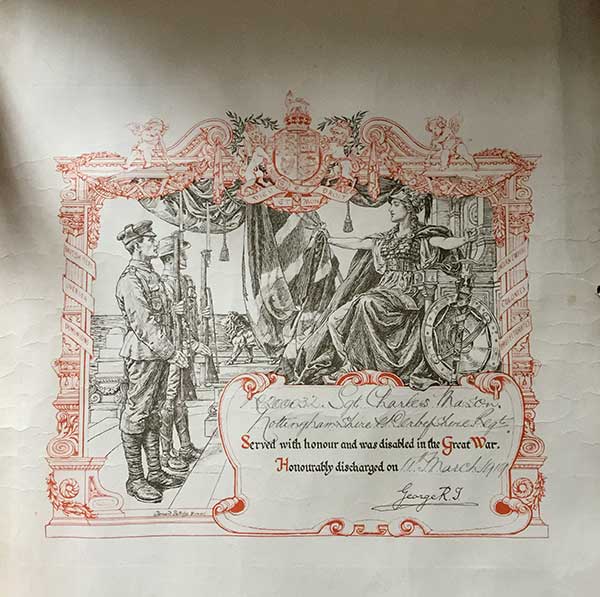 Newspaper Reports
In the Derbyshire Courier dated 15 July 1916 it stated that Sergt. C. Mason of Crich had been wounded.

Derbyshire Courier , 29 December 1917
A feature of the holiday has been the unusually large number of local soldiers who have been fortunate in securing Christmas leave. The list includes Sgt C. Mason, from Ecclesall (Staffs), convalescent home; Private J W Heathcote, A S C (Mechanical Transport), from France; and driver William Coleman, France – the two latter were over together just a year ago – and Sapper Hy V. Smith in the Signalling Service, R.E., who came from France on Monday, after eight months across the Channel. Driver Jas H Dawes, Driver James Bingham, Lance Corporal W Hallam, Cpl Jas Holmes, and Bugler William Hartshorne have also been over on leave. The latter, who is staying with Mr A Buckley, of Park Head, is attached to the Canadian Forces. Along with his parents he emigrated from Park Head, cried, to the Dominion before the war, and like his brother, Tom, he enlisted in the Canadians during the earlier stages of the war.

Derbyshire Courier, 15 February 1919
Sergt.Charles Mason of the Church, Crich, one of Crich's August 1914 soldiers, has received his discharge and returned home on Tuesday. He has been wounded several times.

Derby Evening Telegraph Tuesday August 2 1932
Veteran Foresters in France
SOMME MEMORIAL TO BRITISH DEAD
Among the 73,000 names inscribed on the panels of the Somme memorial to the British armies at Thiepval are those of 1,483 Sherwood Foresters. The memorial was unveiled by the Prince of Wales yesterday as president of the Imperial War Graves Commission. Beside him stood the president of the French Republic. The names of 73,367 British dead who have no known grave are commemorated by this memorial.
The general committee of the Sherwood Foresters Old Comrades Association decided that the association should be represented at the unveiling ceremony, and the following representatives of the Association were selected: –
COUNTY REPRESENTATIVES
Mr H. Allsop, of Ripley who enlisted in 1886 served with the 1st Battalion in the South African war, re-enlisted for active service in 1914, and served for seven months on the Somme with different service battalions of the regiment.
Mr F. Flowers of Whitwell, near Mansfield, who served with the 1st Battalion Sherwood Foresters in India before the war, went to France with the 2nd Battalion in 1914, and after being wounded fought with the 2nd and 10th Battalions on the Somme; and
Mr C. R. Mason, of Crich who, as a Territorial soldier served with the 5th, 11th, and 12th Battalions of the regiment on the Somme.
It was also intended that the 1st and 2nd Battalions of the regiment should be represented by a senior serving officer, and Major R. L. Sherbrooke, D.S.O., was selected, but at the last moment was prevented from attending the ceremony.

Derby Daily Telegraph 24 January 1938
The funeral took place at Crich Parish Church on Saturday of Mr Charles Richard MASON (56), of Mount Cottage, Crich. Mr MASON, who was twice wounded during the war, was a member of the Crich branch of the British Legion. He was a trustee of Crich Comrades Club and for four years carried out the duties of secretary.