Biography
John was born in 1869 and lived at Park Head, which is on the boundary of the parishes of South Wingfield and Crich . He worked as a farm labourer and does not appear to have married. In 1921 he died suddenly, aged fifty, at a Coddington farm on which he was working. No inquest was deemed necessary.

Medal Roll Index Card
He was awarded the Victory and British War medals. .

Service Record
John enlisted on 27 June 1918 aged 47 years and 2 months whilst working as a farm labourer. The next of kin was his aunt, Mrs Curzon, Park Gates, Crich. His height was 5ft 9in. He was awarded the Victory and British War medals. In November 1922 a letter was written from the RASC to his last known address, Top of Rock, South Wingfield, asking for information as to his whereabouts so that his medals could be forwarded. A reply was sent from his aunt stating that he was deceased.

There was an oddity in the medal entitlement record dated 24 October 1922 stating that his medals were the 1914-15 Star, British War and Victory Medals. But as he did not enter service until 1918 he would not have beeen entitled to the 1914-1915 Star.

John Lee's Absent Without Leave's record is interesting as the records below show. His army record records that he was in France between 5 November 1918 and 16 June 1919, arriving back in the UK 17 June 1919 yet else where in the records he goes AWOL at Rheinbach, Germany, on 15 June 1919 not returning to his Unit until 15 September 1919. 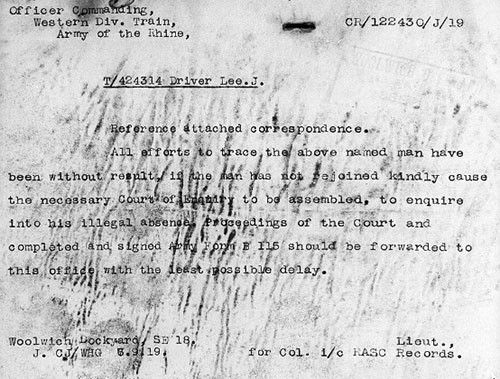 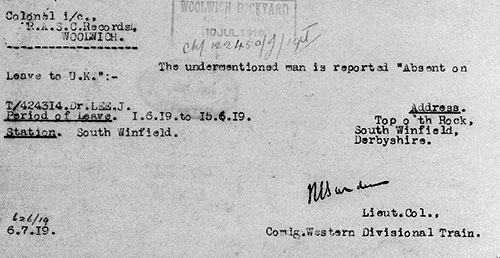 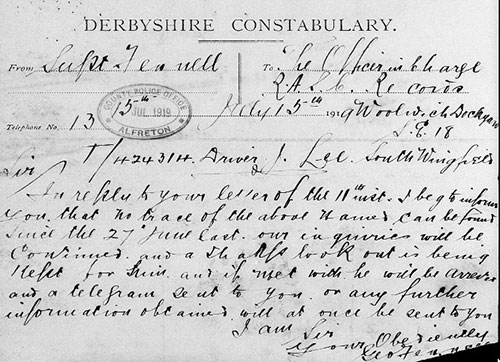 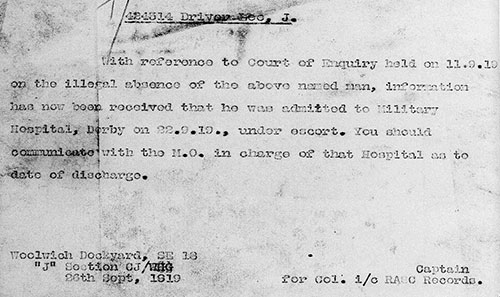 During his absence his aunt, Mrs Curzon, was questioned as to his whereabouts. She responded that she last saw him about 5 weeks ago, didn't know his present address nor his last. A correspondence dated 6 August 1919 fom the Commaning Officer stated that Private Lee had not returned to his Unit.

He received a provisional disability pension of 5s 6d per week the result of "the effects of a kick".

Derbyshire Courier 14 May 1921
John LEE, an ex-soldier, formerly of Toll Bar Cottage, Park Head, Crich, was found dead in the farm buildings attached to Culland Farm, Crich, last Friday night. LEE , who had served with the R.A.S.C., was casually employed by Mr Philip CRITCHLOW: of Culland Farm. Recently he had been suffering from throat trouble and had received medical attention. It appears that Hector BARBER, a farmhand for Mr CRITCHLOW, saw LEE in the evening, and a mug of tea was taken to him in the building about 8.30. About 11.30, before retiring for the night, another visit was paid to him by BARBER, who found the man dead in the outbuilding. The matter was reported by the police to the Coroner, who deemed an inquest unnecessary. LEE was 50 year of age. The funeral took place at Crich on Tuesday, the Rev R.O. WILSON officiating.