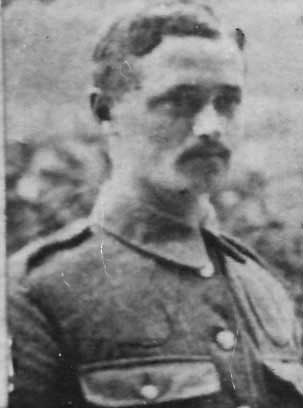 Biography
Arthur was born in 1893 at Alderwasley, son of Benjamin and Sarah Ann Lee. He played cricket with the Alderwasley Cricket Club (see the photograph below). He worked at Lea Mills as a clerk and was one of the men who volunteered at the meeting in the factory on 17th August, 1914. He joined the forces on 25th August, 1914. 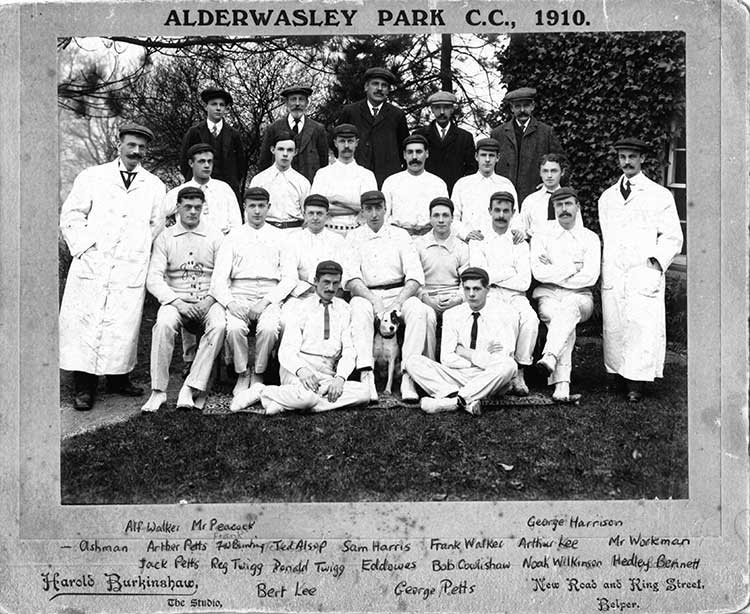 He enlisted as a Private and initially served in Gallipoli. After a period in Egypt he went to France, as a corporal in July 1916 . When the Company sent a parcel of groceries to him in France during October 1916, it was returned as he was in hospital. He was probably wounded between 26 and 28 September 1916 when the Foresters attacked near Thiepval. [Steve Morse]

A parcel containing vests reached him in December 1916, finding him in Cavendish Bridge VAD Hospital, Shardlow, Derby. He was discharged as the result of his wounds in October 1917 aged twenty-four, having been awarded the Silver War Badge. On his discharge record his given address was Meerbrook, Whatstandwell. He was transferred to Class P Army Reserve as Lance Corporal, no longer fit for War Service and not to be compulsorily posted for service under the Military Act 1917.
After enlistment in the Sherwood Foresters he was in the local newspaper along with James Toplis, another Lea Mills worker. Arthur married Ruth Disney in 1915 March Qtr ( Shardlow reg district)

He was not on the original Crich Roll of Honour. The Arthur Lee MM on the Roll was Arthur James Lee MM.

Derbyshire Advertiser and Journal, 6 August 1915
ALDERWASLEY MEN AT THE FRONT
The Wirksworth parish magazine says: – “Since the magazine last came out, a number of our young men have started for the front. E Redfern, in the RFA, has been in hospital; Arthur Lee and Arthur Carrington started for the Dardanelles about July 1; Herbert Petts and Oscar Snow about the middle of the month for France; JHM White, whom we heartily congratulate on his promotion to be captain, left about the same time, having been engaged in Staff work, and the work of embarking troops. May they be in God's keeping and returning safety and with honours gained. Our best congratulations also to be given to George Petts who is now Lance sergt. We were glad to see Capt Shepherd-Cross home on leave and in good health.”

Lea Green, Near Matlock
23rd Oct. 1916
Dear Lee,
I have sent you a parcel of eatables from Austin, Grocer, Derby, which I hope you will safely receive, and I shall be pleased to have a letter from you telling me how you are and whether the contents of the parcel are what you like. I have taken some trouble in choosing these contents and should like to know whether what has been sent is liked, so that I can have some guide when I next want to send you a parcel.
I fear the war is not over yet and that you may be some time away, and I should like you to know you are not forgotten and from time to time should like to send you a parcel. If you want any hosiery or a waistcoat write and let me know and I will do my best to send what you want. I believe all the Derbyshire men are to have a parcel at Christmas, sent by a Committee, of which the Duke of Devonshire is chairman. They have been asking for subscriptions and you will have to look out that you get your parcel.
I hope you are well and that you may have good luck and a safe return.
Yours very truly,
J. B. Marsden-Smedley
Cpl Arthur Lee 13271, C. Coy, 9th Batt. 11th Division, Sherwood Foresters, B. E. F. France

Cavendish Bridge, V.A.D. Hospital, Shardlow, Nr. Derby
18.12.16123
To Messrs John Smedley Ltd
Dear Sirs
Many thanks for your kind gift which has reached me quite safely.
The vests were most acceptable and I’m sure that the lads in France, if they have received the same gift will appreciate your kindness very much.
My wounds are nearly healed, although; I shall never be able to walk properly again, as the principal nerve in my left leg has been severed and it has rendered my foot practically useless.
Yours respectfully
Cpl Lee A. No 13271 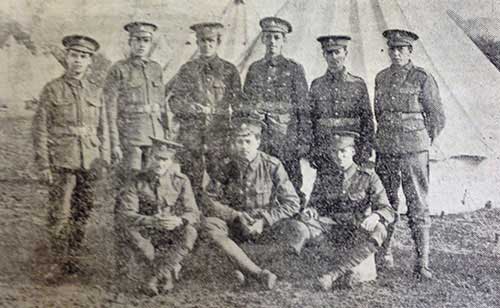 LOCAL PATRIOTS
Above is photograph, by Barnett, Middlesborough, of some of our local patriots now at ––, ready for the front:–
Standing (at extreme left) Private J. Toplis; 4th from left, Private B. Checkley; next on right, Private Lee (Whatstandwell), and Private Travis, on the extreme right. Left, (sitting) Private J. Margerrison; on the extreme right-hand, Private George Stacey