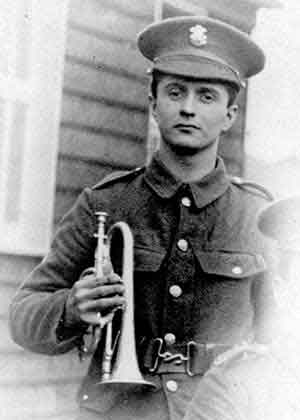 Biography
Courtesy Margaret Charboneau
James (Jim) Edgar Holmes was born 1892 at the Old Vicarage, Crich to Samuel and Elizabeth Holmes. He was a Lea Mills worker who enlisted in 1916 with his cousin and best friend George Haslam, who is also on the Crich Roll of Honour. Both served in France with the South Wales Borderers, remaining in Germany after the Armistice until 1919. During the war he served with the 12th Welsh Regiment and became bandmaster. Music was his life-long interest. After the war, during the days of silent films, he played for a number of years in the orchestra of Ripley Hippodrome. James was a keep sportsman, playing football with several local clubs. His father, Samuel, was a semi-professional footballer for Derby County playing between 1889 and 1891. A bit of a mystery surrounds how he was spotted as Derby was quite a way from Crich in the 1880s. James was a member of Crich United Prize Brass Band for fifty-six years, several years as conductor. He married Edith Olivia Nunn in the Stow Registration District, Suffolk (March Quarter 1919) and moved to Heanor to work in the hosiery trade before moving back to Crich in later years. 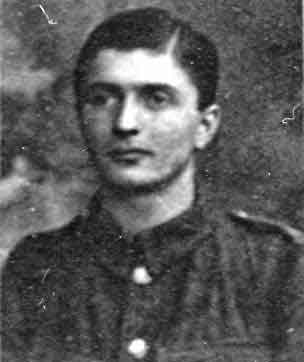 From a postcard of Lea Mills soldiers

As a Lea Mils employee he received various parcels from the Managing Director, J. B. Marsden-Smedley, to which he replied.

I am just writing these few lines to you, I hope you wont think it too much, but I am asking you if you can kindly get us a football, there is myself and a lot more Matlock Boys, we have got a good team and have played a lot of games when out of the trenches, but at present we are without a ball, we have a bit of time when we are out of the trenches and we like a game to keep us fit.  I must say that all the Matlock boys read in the paper of the death of your brave Son, and we all Join in sending our deepest Sympathy, I will close now hoping you will oblige your Obedient Servant
Pte J. Holmes 2050

L/Cpl J. Holmes, 58 T.R. 4/4370 A Coy., No. 9 Camp, Kinmel Park, Nr Rhyl.   N.W.
Mr. Smedley
Dear Sir
Many thanks for your kind Xmas gift.  I'm sure it is very good of you to think about us while we are at War and I hope before long we shall return to Lea Mills and settle down in peace and Comfort.  Once more wishing you a Merry Xmas and a Happy New Year when it comes.
Yours Truly
J. Holmes

Sgt J C. Holmes, 51st. S. W.  B., Sgt's Mess Alderburgh, Suffolk
Dear Sir
Thanks very much for parcel received quite safely.  It is very kind of you to think of the Boys who went from Lea Mills some of them now killed.
It hardly seems true.  I don't know what to think of the war, Sir there isn't any sign of it being over.  Once more thanking you very much for Parcel.
Wishing you a Prosperous New Year.
Yours Very Truly
J.E. Holmes

51st S. W. B., Stowlangtoft Camp, Nr. Bury St. Ed., Suffolk
Sir
I wish to thank you for the splendid Parcel you have sent me — I can assure you it was very acceptable.  Just coming off a Physical Drill & Bayonet Fighting Course.
Yours Faithfully
Sgt JE Holmes 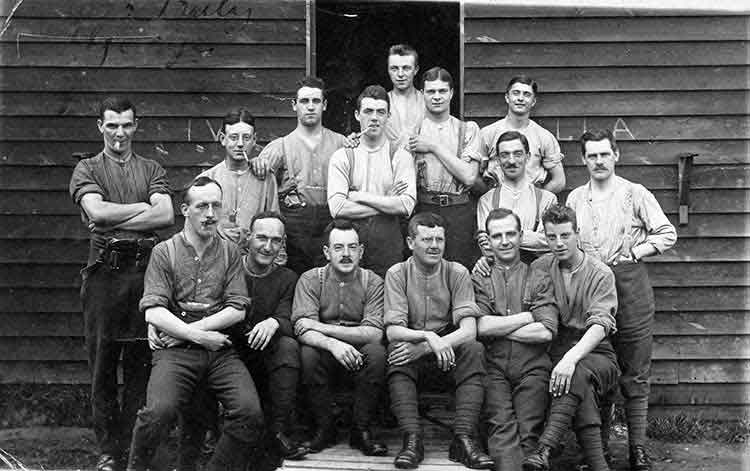 George Haslam standing sixth from the left with Jim Holmes next to him, seventh left

Derbyshire Courier, 29 December 1917
A feature of the holiday has been the unusually large number of local soldiers who have been fortunate in securing Christmas leave. The list includes Sgt C. Mason, from Ecclesall (Staffs), convalescent home; Private J W Heathcote, A S C (Mechanical Transport), from France; and driver William Coleman, France – the two latter were over together just a year ago – and Sapper Hy V. Smith in the Signalling Service, R.E., who came from France on Monday, after eight months across the Channel. Driver Jas H Dawes, Driver James Bingham, Lance Corporal W Hallam, Cpl Jas Holmes, and Bugler William Hartshorne have also been over on leave. The latter, who is staying with Mr A Buckley, of Park Head, is attached to the Canadian Forces. Along with his parents he emigrated from Park Head, cried, to the Dominion before the war, and like his brother, Tom, he enlisted in the Canadians during the earlier stages of the war.

Derbyshire Courier 21 June 1919
Corporal George HASLAM, South Wales Borderers, of the Town End, Crich, writing home, says he won second prize in the bandsmen’s race at the Whit Monday sport held in the Cologne district. Sergeant James HOLMES, of Crich, was playing with the same band during the week. Both were players in the Crich Silver Band. Corporal Haslam's prize was a razor and case.

Derbyshire Courier, 30 August 1919
Sergt George Haslam, South Wales Borderers, of the Town End Crich, arrived home on Saturday from Germany, after having been demobilised. Sergt Haslam along with Sergt James Holmes of Crich, Joined the Borderers in January 1916. Since the armistice both have been with the Rhine occupation army and have played with the military bands there. Before joining up they were members of Crich Silver Band.

Derbyshire Courier 13 September 1919
Sgt-Drummer James HOLMES, South Wales Borderers, of the Old Vicarage, Crich, was demobilised last week, and reached his parents home on Tuesday after being with the Rhine occupation army since the armistice. Sgt HOLMES who intends to live in Suffolk has received a communication from Manchester City Football Club with a view to having a trial with them. He has also had several offers for orchestral engagements including one at Cardiff. He is a skilled cornet soloist.