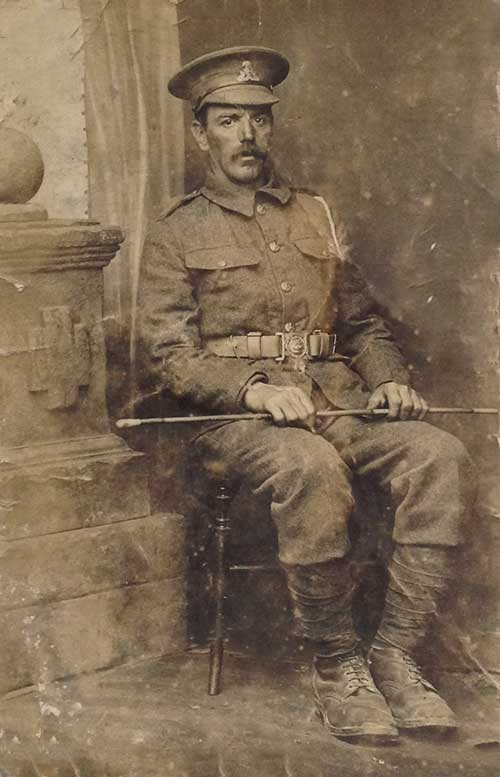 Biography
Samuel was born at Crich in 1881, the son of Henry and Ellen Hollingsworth. He worked at Lea Mills before enlisting at Crich in December 1915 aged thirty-four, suffering from rheumatism. He had married Martha Ann Allen in July 1904. He was with the Foresters on enlistment and transferred to the Royal Garrison Artillery as a signaller and gunner. Although he had enlisted in 1915 it was not until January 1918 that he was mobilised as a gunner entering France in June 1918, before being demobbed to Mount Pleasant, Crich, in April 1919.
He was a gifted tenor horn player, playing for both Lea Mills Band and Crich Brass. Before the war he used to play for the famous “Besses o’ th Barn Band”, from Lancashire, when they were at their best, touring America, Canada, Australia and New Zealand with them and winning many solo contests.

As with other Lea Mills employees he received food and clothing parcels from JB Marsden-Smedley. 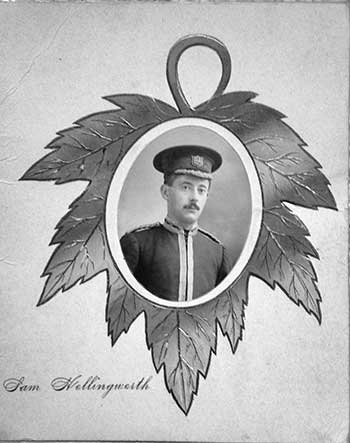 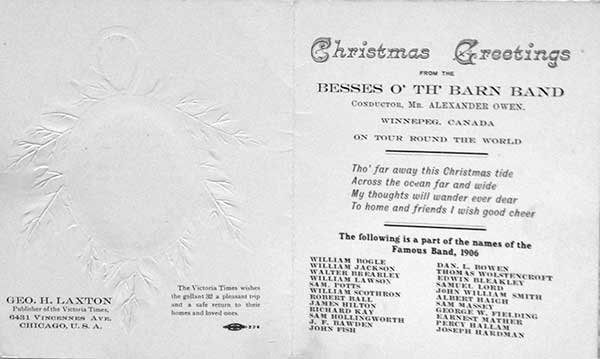 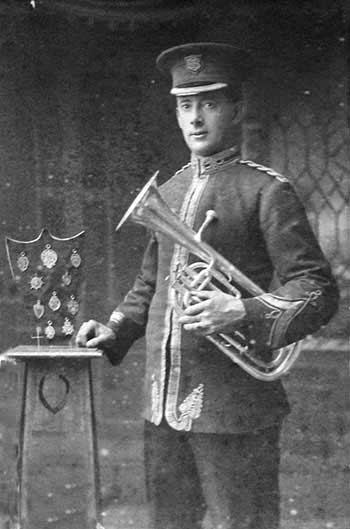 Medal Roll Index Card
He was awarded the British War and Victory Medals.

Derbyshire Times 4 August 1906
Many will be pleased to hear that Mr S. HOLLINGSWORTH, of Crich, has been honoured by being selected as solo tenor horn player in the famous Besses o’ th’ Barn Band, who have just started on a tour round the world. Mr HOLLINGSWORTH has been a player of the Lea Mills Prize Band for some time past.

Belper News 29 November 1907
The Besses o’ th’ Barn Band, who sailed from Australia last week, after their tour there, includes Mr Sam HOLLINGSWORTH, of Crich, who is a horn player. His many friends are arranging to welcome him home in a suitable manner. A committee has been formed, and a meeting held at the Kings Arms Hotel. Mr John KNEEBONE has been appointed secretary, and Mr W. WILLGOOSE treasurer, to try and raise subscriptions to get up a torchlight procession to greet Mr HOLLINGSWORTH on his return.

Derbyshire Courier, 29 March 1919
Crich, Lea and Holloway
The total number of men who have entered the Army and Navy from Crich since the beginning of the war in 1914 appeared to be about 300, of whom 60 had been killed and about 40 others seriously and permanently disabled.
The return to civil life of Gunner Samuel Hollingsworth has given great satisfaction to Crich parishioners generally and to music lovers in particular. Before joining up, Gunner Hollingsworth was beginning to see the fruits of his labour as bandmaster and conductor of the Crich Silver Band. During his absence Mr WT Curzon has deputised with much success, and on his return to the bandroom at their recent practice Mr Hollingsworth found that, despite war’s levy on the men, the band was still forging ahead. With over two dozen players and an excellent set of instruments, backed up by the skilled tuition of their returned leader, a rosy future is promised.

Derbyshire Courier, 30 August 1919
Mr S Hollingsworth and members of the Crich silver band were successful in a contest at Barrow Hill, on Saturday. Although it was their first attempt in the contest field since the band has been reconstituted, they gained the second prize in the quickstep piece, and fourth in the selection contest, against a number of high-class bands. A good future is assured for the band now that several of their former players have returned from military service.

Derbyshire Courier, 30 August 1919
An impressive memorial service for Lea and Holloway men who fell in the war was held at Christ Church, Holloway, on Sunday and was conducted by the Rev Canon WG Mosse, vicar of St Annes, Moseley, Birmingham. The congregation, which was representative of all classes, included the local discharged and demobilised soldiers and sailors, who marched in charge of ex-Sgt Foster from Lea Shaw to the church, headed by the Crich Silver Band. A portion of the church was also reserved for the relatives of the fallen. The service opened with the National Anthem, played by the band, under the batton of Mr S Hollingsworth. Canon Mosse preached from the text, “What mean ye by the service?” and emphasised the fact that if we must honour the memory of the fallen we must stand by the principles for which they fought and died. The hymns sung were: “For all the Saints,” “There’s peace and rest in Paradise,” and “Fight the good fight.” Miss B Price was the organist. After the sermon the band played the Dead March in “Saul,” and the “Last Post” was sounded by Mr S Hollingworth. Following the service the ex-soldiers reformed at the church gates and marched back to the Green, Holloway. The necessary arrangements had been made by the committee of the local branch of the Federation of Discharged and Demobilised Soldiers and Sailors.

I am quite well
I have received your parcel dated Sep 11th
Letter follows at first opportunity.
S. Hollingsworth
Oct 1st, 1918