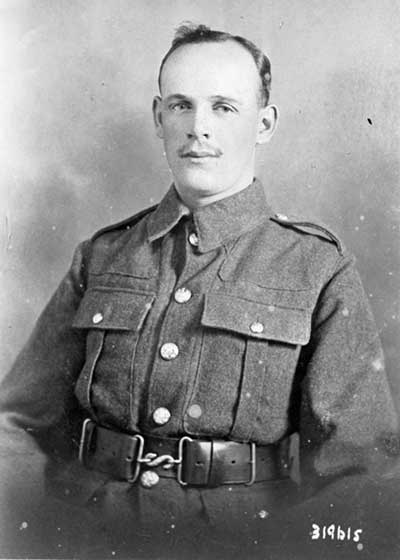 Biography
John was born in 1891 and worked at Lea Mills. He married Eva Eaton December qtr 1916 (Belper reg district). He was conscripted in June 1916 aged twenty-seven and sailed for France in December 1916. In 1918 he was accidentally burned by the explosion of a lamp and the injuries to his head, face and right hand were so severe that he was transferred to a VAD hospital in Devon.
He wrote letters expressing his gratitude for the parcels sent to him by J.B. Marsden-Smedley, the Managing Director of Lea Mills.

Friday, Jan 5 1916
Pte J Haslam
No. 58413, 192 Company, MGC, BEF
Dear Sir
Many thanks for the parcel containing the pair of under Shirts which I have received from you today.  I must say it is very good of you to send me what I have received from you this Xmas and New Year and the Shirts are just what I want as it is very cold here at night especially when we cannot get a fire in our Billet.  We have not had much snow here yet but I heard that you was having Wintery weather in England.
I wish we was allowed to put more in our letters as I should be able to send you a very interesting letter but I hope it will soon be over and then I shall be able to tell all I have seen.  Excuse this short letter, so I will now close.  Wishing you every success in the new year I remain yours Truly
J Haslam

December 29 1916
Pte J Haslam
No. 58413, 192 Company, MGC, BEF
Dear Sir
Many thanks for splendid parcel which I received from you on the 27th Dec.  It was quite a pleasant surprise when I had the parcel handed to me.  Of course these are the sort of surprises which we make a fuss of.  You could hardly credit how the Boys anxiously await the mail from Dear old England.  It does one good to leave home if it is only to appreciate what we have left behind.  Dear Sir you must excuse this letter as I am writing under difficult conditions I am in a pig stye.  So you will have an idea of the surroundings but we have to make the best of things in War time.  We are having wet weather out here at present hope it is better in England.  I must draw my letter to a close.  Hoping to soon be back working for the Old Firm again.  I will now close wishing you and your family a happy New Year.
I remain yours Truly
J Haslam

Thursday, Aug 30 1917
Dear Sirs
Many thanks for the parcel which I received yesterday, it was quite a pleasant surprise.  I can assure you I little thought when I came in off Duty what was waiting for me.
Dear Sir I have just come back into the trenches again as our Company has been out on rest for a month you must excuse this writing as I am down in a dugout.  And they are not very ideal places for letter writing.  Well I must now close hoping this short letter finds you all in the best of health.  Hoping it will not be long before I am back with the Old firm again.
So I will now close.
I remain yours Truly
Pte J Haslam
192 Company, MGC, BEF, France

Tue? Dec 25 1917
Dear Sirs
Many thanks for the shirts which I received a few days ago.  I shall find them very usefull this Winter.  We are having as good a time as we can today under the Circumstances.  Hoping you have a merry xmas and a bright and happy new year.
I remain
Your Truly
Pte J Haslam

Tuesday, Sep 24, 1918
Dear Sirs
Many thanks for the parcel which I received from you a few days ago.  Well Sir everything was in perfect order and not in the least damaged but it had not got so far to go this time with me being in Hospital in Devonshire.  But I can assure it was very welcome I will now close my letter again thanking you.
I remain Your Truly
Cpl John Haslam
58413, 6th MGC, VAD Hospital, Chudleigh, Devon

His letter dated September 24th 1918 was from the VAD Hospital, Chudleigh, Devon. 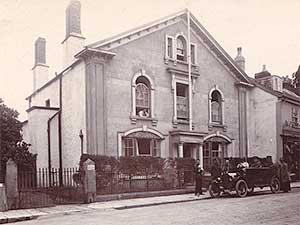 Medal Roll Index Card
Rank of corporal. He was awarded the British War and Victory Medals

Derbyshire Courier, 15 June 1918
Crich, Lea & Holloway
Further news with regard to Cpl John Haslam, who, as we reported last week, was accidentally burned in France through the explosion of a lamp, has been received this week. A letter written by a chum in hospital shows that he has been moved from the base to Exeter, from which place his companion writes. He states that Corporal Haslam is progressing as well as can be expected. His injuries are to the head, face, and hands, the right hand especially being badly burned.