Biography
John was the son of Samuel and Elizabeth BOWER who lived at Rose Cottage, The Common, Crich. His father was chief accountant for the Midland Railway at Derby. John was born on 19 September 1883 at Derby; his parents were temporarily living at 43 Bateman Street in Derby but later returned to their home at Crich where Samuel was subsequently baptised in 1884.
He married Alice Elizabeth MARTIN (usually known by her middle name) at Alvaston in 1907. They had one son Samuel Alan BOWER born in 1908.
He enlisted into the Royal Engineers as a Sapper later receiving a commission firstly to Lietenant then Captain. Samuel entered France in 1917 and was demobilised in 1920 retaining his captaincy. In civilian live he lived at Woodbine Cotagae in Alvaston, near Derby and followed in his father's footsteps becoming a chief accountatnt for the Midland Railway. He was very prominent in the community becoming Councillor, Alderman and a JP. His influence stretched beyond Alvaston district – becoming an international judge of Old English Sheep dogs at Crufts and across Europe. A painting of one his champions was used for many years on the sign for "The Dog" public house at Pentrich (not currently though).
During WW2 he served with the Sherwood Foresters in the National Defence Company. The title of "Captain" was used until his death in 1966 althouth the advert for the sale of his medals after his death stated that he was Colonel. It also showed he had been awarded the OBE as indicated by the first of his five medals.

His son Samuel Alan BOWER became a very popular, highly qualified and reknown medical doctor who served in WW2 and was awarded the Croix de Guere.

Marriage at Alvaston in 1907 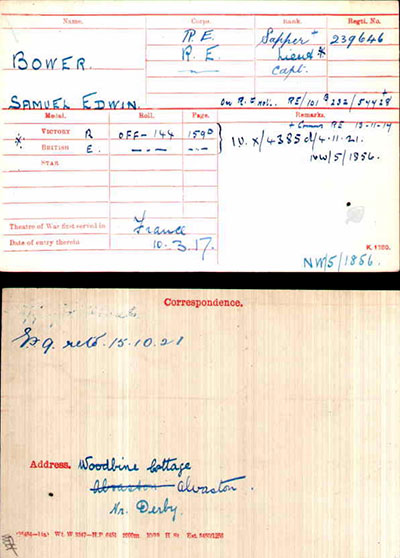 Derbyshire Times 31 January 1920
Capt S. E. BOWER, second son of Mr and Mrs Samuel BOWER, Grove House, Crich, has just been demobilised, but retains the rank of captain. He enlisted early in the war and was badly gassed. Previous to joining the army he was on the clerical staff, accountants department, M.R. Derby, of which his father was chief.

Nottingham Evening Post 18 April 1966
The death was announced yesterday of Capt. Samuel Edwin Bower, for 40 years a judge at Cruft's Dog Show, and at major dog exhibitions in Ireland, Spain and France. Capt. Bower of Woodbine Cottage, Alvaston, near Derby, was 82. He was a former Derbyshire County and South-east Derbyshire rural councillor

Kelly's Handbook to the Titled, Landed and Official Classes, 1960 edition.