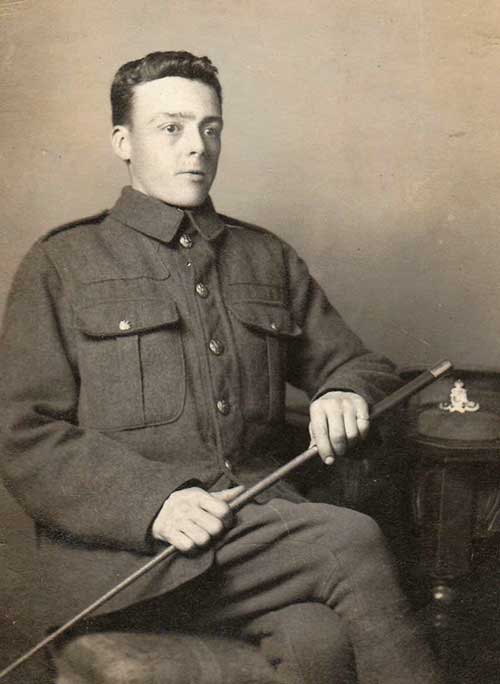 Biography
Frederick Allwood was born on the 10 September 1889 and worked in the factory of John Smedley Ltd and he joined the forces on 26th January 1915. The company record of Serving Men states: Fred H. Allwood Driver 8040 Royal Field Artillery No 3 Coy. No 17 Camp, Employment Camp Base Depot, Harfleur, B.E.F., France. He served in France in 1916 but there is no certain evidence of when he sailed. He received a parcel from John Smedley in October 1916 (groceries), which he acknowledged promptly (25th October). Whilst with the Royal Field Artillery he was with the 34th D.A.C. which was the Divisional Ammunition Column. During Oct 1917 he was hospitalised with an illness. When he was transferred into the Army Service Corps – he was with the motor transport (MT) section, presumably as a driver.
He never married and later worked as a council roadman. 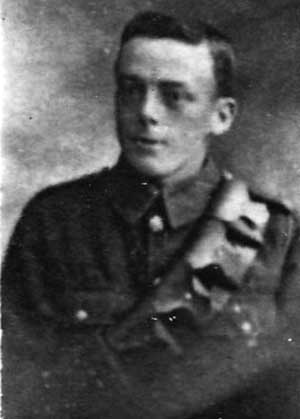 Medal Index Record
He was awarded the Victory and British War medals.
Transferred from RFA to RASC 2/4/18

Lea Mills Letters
In response to the parcels Frederick received from Lea Mills he wrote to Mr J. B. Marsden-Smedley expressing his gratitude.
John Smedley Ltd offered him a job on his return from service but he declined the offer.

October 25th 1916
No 8040
No 1 Sect, A. Echelon, 34th D A C
B.E.F France
Dear Sir,
Please accept my many thanks for the very nice & acceptable parcel which I received from Austin & Co. Derby, today. I have enjoyed some of the contents for my tea, & they were very nice. I have been out here now for nearly 10 months, but I have not seen anyone from Lea or Holloway yet.
Again, thanking you for the parcel,
Yours respectfully
Drv F. H. Allwood

Sunday, November 12th 1916
France
Dear Sir;
Thank you very much for the Kind letter I received from you about a fortnight ago. I was very pleased with the contents of the parcel you so kindly sent to me, as I told you, in a letter I sent you thanking you for sending it. I asked several of my pals to have a taste of the Camp-Pie, & they all said it was “tres bon”, & it was. I have been up at the guns for 10 or 11 days, making new positions & have not had any chance to write, or I should have answered your letter before now. Where we are now is a long way from either a Y.M.C.A, or a shop or any other place that is occupied by any one only troops. We are on a much quieter part of the line now, than what we were in July and August, although it is “lively” enough occasionally as “Fritz” Keeps sending a few big shells over daily. About a fortnight ago a party of us were getting bricks for some stables, & we had been having a look round some houses that had been shelled a few days before, & we had only just got out of the houses when “Fritz” commenced to shell the place, & he put some big shells in the same house that we had just left & knocked it all to bits. Luckily, no one of our party was hit. I am writing this in a dug-out in which we are living at the present time. We have made a stove out of an old oil-drum, as of course we have to make ourselves as comfortable as possible. It is a “little bit” different to going to church on Sunday evening. Of course, I am not grumbling, as I know all these things happen in war. It is a great deal better being in a dug-out with a decent roof over your head than lying out in the open for 3 nights in the open, in the rain with nothing over you only a great coat. We have just been unloading wagons that have come up with material, one of them has got stuck in the mud down the road, the other teams have gone to pull them out. Again thanking you for the nice letter, I am pleased to say I am in the best of health at present, & hope to keep so.
Yours respectfully,
Drv F.H. Allwood
8040, No 1 Sec A Ech
34th D.A.C   R.F.A
B.E.F. France

December 30th 1916
No 8040, “A” Sub.Sect.,
No1 Section
34th D A C
B.E.F
Dear Sirs,
Thank you very much for the nice parcel I received from you, the other day, with 2 very nice undervests in. I was very pleased with them, they are just the thing for the weather we have been having over here lately, nice and warm one day, & cold & wet the next. We have not had much snow here yet, but it is very changeable.
Again, thanking you for the nice parcel, & wishing you a Prosperous New Year.
Yours respectfully,
Dr F.H.Allwood

December 30th 1916
No. 8040, A Sub Sect,
No 1 Section,
34th D.A.C.
B.E.F.
Dear Sir,
Thank you very much for the splendid parcel of good things I received from you a few days ago. I was very pleased indeed with it, & I have enjoyed the contents very much. It is very nice to know that the people at Home think about us out here, & I for one (& I am sure all the other boys as well) appreciate very much, any such kindness. It was a very different Xmas here, to what it used to be in good old ‘Blighty’ before the war. Of course, when we awoke on Christmas morning, we sang “Christians Awake”, & several other Carols etc, before we went on parade, just to remind us that it was really Xmas. Again, thanking you very much for your Kindness, & wishing you a Prosperous New Year.
Yours respectfully,
Dr F.H.Allwood
R.F.A.

August 29th 1917
Dear Sirs
Thank you very much for the very nice parcel, which I received from you on Tuesday dated 22/8/17. All the contents were very nice, & I have enjoyed them very much. I appreciate your Kindness very much as we boys out here, Know the value of such grand parcels. Again thanking you for the parcel,
Yours respectfully,
Drv. F H Allwood
8040 RFA

Jan 10th 1918
France
Dear Sirs,
Thank you very much for the kind gift of the pair of vests which I received last night. Of course I should have received them sooner, but I have been moved about a bit lately. Again, thanking you for the parcel & wishing you a prosperous New Year,
Yours respectfully,
Drv. F. H. Allwood
8040. R.F.A.

Sept 23rd, 1918
No /M/ 332221 Pte Allwood F H
Sirs,
Thank you very much for the splendid parcel of good things which I received from you this afternoon. I was very pleased to receive such a splendid parcel and I assure you I appreciated your kindness very much.
Wishing you all prosperity.
Yours respectfully,
Pte Allwood F H
ASCMT